Venturous Vanguard Video Festival (VVVF) is an international video festival, featuring video shorts from all over the world. 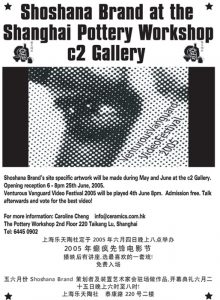 I founded VVVF in 2004, and have been its sole curator.

VVVF used to depict each year a different theme.

The theme of the 2004 festival was City Life. The 2005’s theme was This Insane World. Participating movies were from Nederland, Canada, Russia, Italy, England, the Czech Republic, and the United States.

In 2004 VVVF was screened throughout the city of Los Angeles, USA. In 2005 I brought it also to China and screened it in the cities of Kunming and Shanghai. The festival represented works by professional video artists, and in 2005 it also displayed videos created by teens, aged 14-17.

The 2007 festival was screened throughout the city of Los Angeles.

Its theme was Laugh, Cry, Be Poetic, Get Crazy.