While Movie Trailers are all around, not every author (or comics creator) makes a Book Trailer. 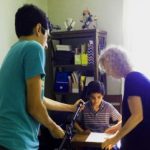 It does not occur to many authors that a Book Trailer can be used as a great exposure and communication tool. For some time, it hadn’t occurred to me either.

However, since I was planning to create a YouTube channel for my upcoming comics and stories, a Book Trailer was just the next reasonable step for me.

There is a need to write a script.

But be prepared to change it, as it cannot function as a standard movie script, on its plot and characters. Your Book Trailer’s role is to carry visually and conceptually the essence of your book, so the viewers will FEEL your book before they even hold it in their hand.

When I planned my script I thought: Adventure… Fun… Colors… Both adults and kids… About 2 and a half minutes… and with all these in mind, I wrote the script.

Before you edit the movie, think about how you will connect the scenes visually and conceptually. In my Trailer, for instance, the camera moved from the page I was drawing to the same page that the boy was looking at. 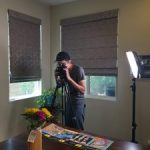 I brought Raphael into the game to videotape, do the sound, and later edit (with me next to him, on the director seat, during the shooting and editing process).

I thought about using both adults’ and kids’ voices to narrate the movie, hence we recorded several takes of the same lines. 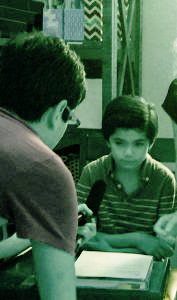 Very quickly I learned that this mixture of voices was a little confusing, so I chose one narrator only.

friends, neighbors, and fans to participate in the movie. I was flexible enough to change locations, and alter the script. The idea of having a kid reading my comics while sitting on top of a tree came out only during the shooting and was utterly spontaneous.

IN THE EDITING ROOM—

Raphael completely got the atmosphere I had wished to achieve and went with it the extra mile. He added the smoke, for instance, and shook the whole screen when Gabi showed up, after being invisible for several hours.

He did the rough cut according to the script I gave him, and later I sat with him for the timing, fonts, small details, and final touch.

We uploaded it to YouTube, and a new channel titled The English Teacher Comics was born. I even called Amazon and advised them on having an option in their Author Page to have a large spot for Book Trailers with a link to YouTube, rather than the small space they’ve got now, in which you need to upload your own movie with no link. I hope they will change it. A Book Trailer is a fun P.R tool that every author should have the option to use to the max.