I am about to publish my 4th issue in the series of The English Teacher Comics: Epic School Life.

My printer has already informed me that my Proof is on its way to me (and we are both very excited!). After checking the Proof, I’ll be ready to confirm the book, and it will be printed and distributed through Amazon, my site, Barnes & Noble and IndieBound Buy, in both softcover and e-book formats.
The process of creating the 4th issue has differed from that of the other issues. I still use colored pencils, but this time I incorporated plenty of Photoshop manipulations.

In this issue, even more than in the others, I have discovered my own voice. 😲  What I express has become more and more what I envision in my mind.

When selling my 3rd issue to libraries around and talking to young students, I have noticed that many of them assume that my comics will involve superheroes, war stories, or sci-fi. They seem perplexed when I tell them that it’s “actually art” and “more of a short Graphic Novel”.

I will never forget the day I happened to view a whole section of Graphic Novels in Barnes & Noble. The open-end and personal way of capturing varieties of plots through images and dialogues excited me so much that I decided to create one of my own. Comic books per se never interested me very much, as I was not interested in their subject matter. However, Graphic Novels go beyond the 2 or 3 genres of comic books and also incorporate a very personal artistic style. 🎨

So What Is a Graphic Novel?

In Japan, they are called Manga, and they have a rich history there. However, when viewing Manga, one cannot really distinguish between styles. All the illustrators of Manga offer their ideas in a very uniform style, and many of the subject matters involve fights and imaginative heroes. Graphic Novels, on the other hand, show a much richer and more varied exploration of subject matters and illustrations’ style. A good graphic novel gives you the feeling you watch a movie. In French, those films are called “Film L’Auteur”. They are not just movies done by some studio but by a singular artist with a very recognizable style, who controls all the aspects of his/her creative work.

The way I see it: Graphic Novels are the best way to encourage resistant readers to hold a book. Graphic Novels are imaginative, artistic, fun, personal, and diverse. They are a little like an enthusiastic start-up inventor or a fresh creative rock band singer, with a unique technique.

I tend to think that my comics are short Graphic Novels, but I guess that the title “Comics” will stick forever to my series. 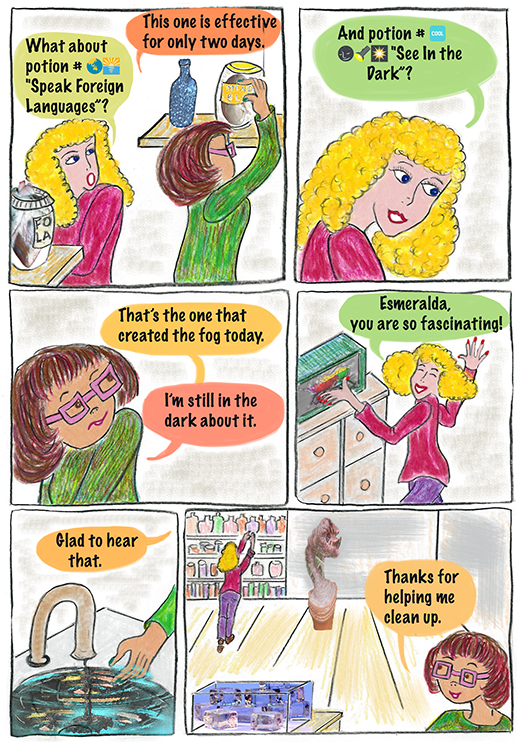