Going through a rapid process of transformation, old buildings in the city of Kunming, China are demolished every day, and new ones rise up. 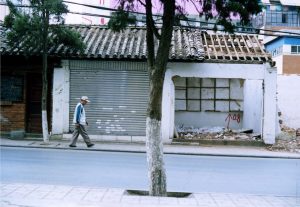 During my two-week stay in Kunming I have often turned my video camera towards construction sites and urban ruins stretched throughout the city. One of the half-destroyed buildings has caught my eye. It was located in Wen Ling Road, across from the French Cafe, a popular dining place.

Wishing to give the space a last gesture of respect, I decided to paint it fluorescent pink. I also planned to hang a pinkish curtain at the space, and display red fresh roses rooted in three red buckets of water. Artificial stylish sunflowers and red artificial roses with big golden leaves, I thought, would give the decor an expensive surreal touch.

The project attempted to contrast distraction and construction. It created a dialogue between exposed walls and decorations that were meant to occupy the interior and now became the exterior.

Accompanied by an art student named Shaxpir I made my rounds in Kunming’s stores to purchase my supplies. Shaxpir assisted me with my negotiations for the best deals and with the execution itself. And so we teamed together at 9 PM on May 12th to paint and decorate the chosen urban site. The street was full of passers-by who stopped their walk for casual conversation and questions. 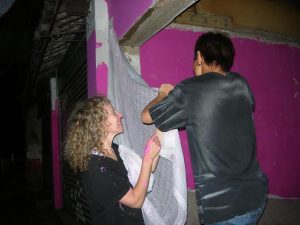 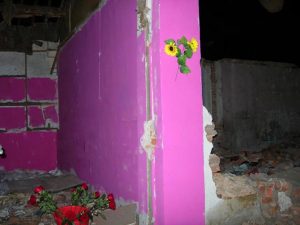 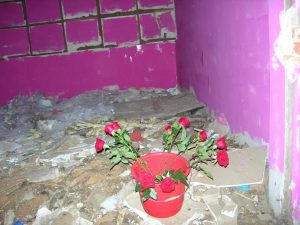 At 10:30 PM the mission was accomplished and we began taking some snapshots and packing our tools.

Fifteen minutes later, while we were talking to friends sitting at the French Cafe, two of the red buckets on their water and fresh roses vanished in front of our eyes. Then came a man that climbed up the pile of bricks, and facing the pink fluorescent wall, peed on the fresh paint. 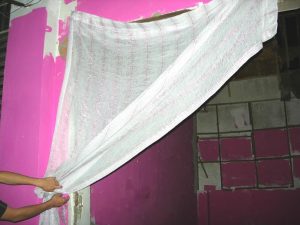 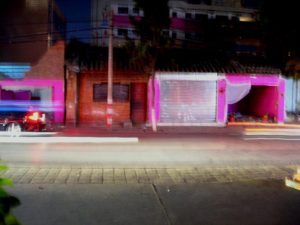 The morning after, at 7:30 I revisited the site in Wen Ling Road.

People were rushing to get to their work and school. The curtain vanished and so were the artificial sunflowers and roses. Stripped walls gave me a shiny pink gaze.

Soon they too will vanish. 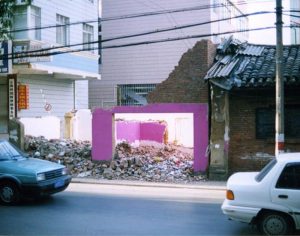