Look at those two portraits that I combined into one image. One is Mick Jagger by Andy Warhol, and the other is The Artist’s Mother, by James Whistler.

Imagine they are talking to each other. Will you be able to look at this image for thirty seconds without losing your interest?

Your eyes and mind will get tired, and if it was a comic book, and next to those two images there were about three bubbles of text, you would wonder what were you thinking when you had bought this comic book.

Let’s call this image a Sequence, and let’s divide it into 6 windows.

I have posted here 6 windows that create some kind of a pseudo dialogue. (Use your imagination, please.) 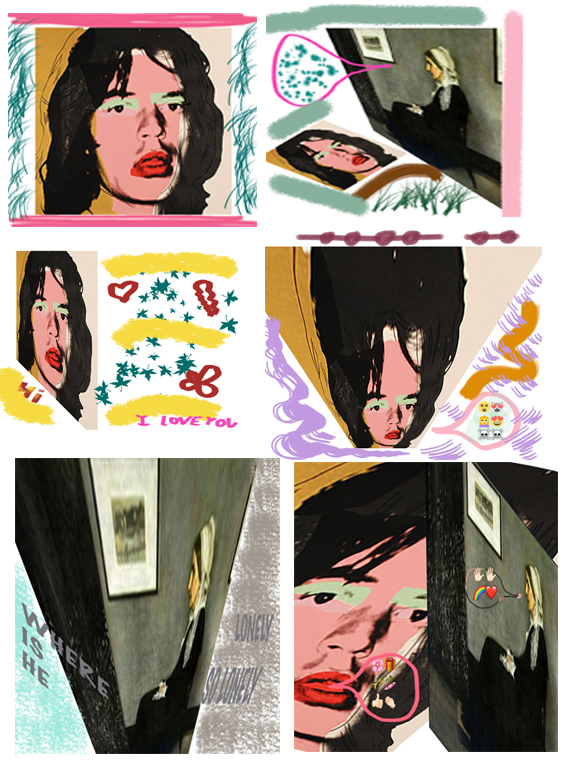 Without going into too many details and dialogues and by using very simple Photoshop tools and emojis, this boring Sequence has just been broken into six gripping windows.
When you look at each one of them, your mind will not be wandering. You will be able to sustain some focus for more than 5 seconds on each window.
And these are the basics of comics.

You bring two or more characters together and create a dialogue. You break them into windows, so each of the characters will show up in a more interesting form than just looking directly at you. You have the character speak one or more sentences, or make an expressive gesture.

If you create a comic book for children, don’t use more than one phrase at a time. Kids tend to get confused when they see too many dialogues in a window. However, they will understand fully what you want to convey if you draw gestures, different facial expressions, fonts in different sizes, and interesting perspectives.
Have this in mind when you create your next comics and may the power of creativity will always be with you.