I decided to convert a messy uncontrollable horrible man cave into a light-hearted woman cave.

It was in Texas, and I’d just purchased an old yet very spacious nice house.

After renovating the house’s floor and walls, mostly with my own hands, I decided that it was the right time to infuse some great vibes in this backyard man cave. 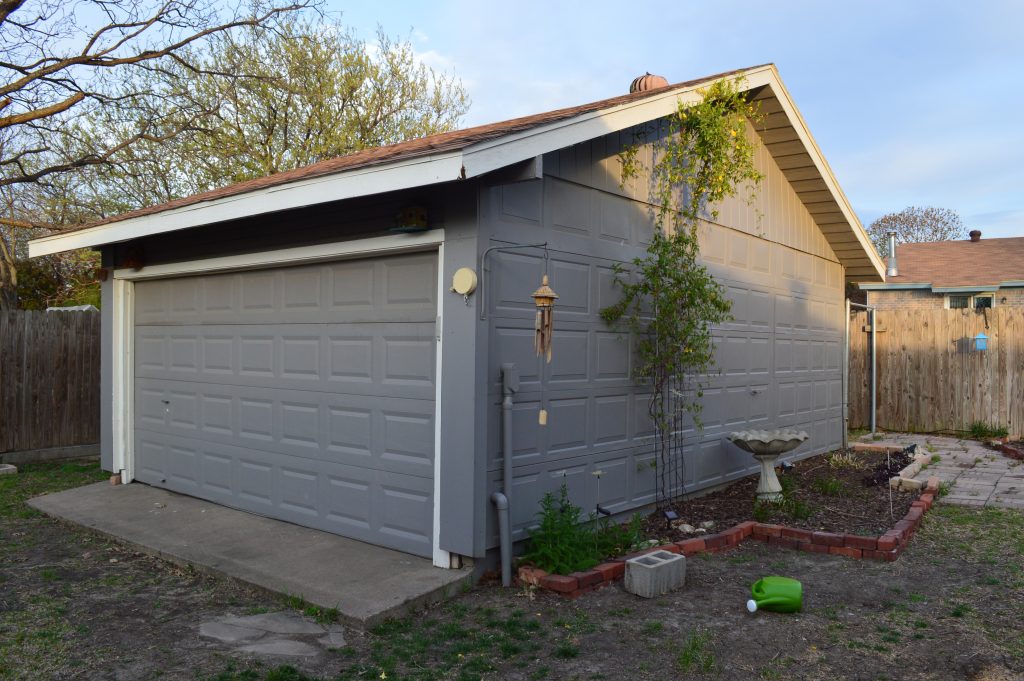 The initial plan was to create a nice residency with a kitchen and bathroom, which may later be rented out. Since some experts said that the cost would reach about $25,000 (mainly paid for plumbing) I decided to make a beautiful studio instead. One wouldn’t be able to sleep or bathe in this 450 sqft, but it will be awesome to teach, contemplate, chill, or create there.

This dwelling had only two small windows and a garage door.

I decided to install in this gem-to-be a nice French door, two skylights, and one more large window.

I also decided to build the walls out of OSB, or what’s called Oriented Strand Board.

I believed it would look artistic, and the plan fit my budget. The intention was to build this whole place for less than $8,000.

The first stage was to clean the floor and take out the trash. This place was so neglected that we even spotted some rats and wasps’ nests. 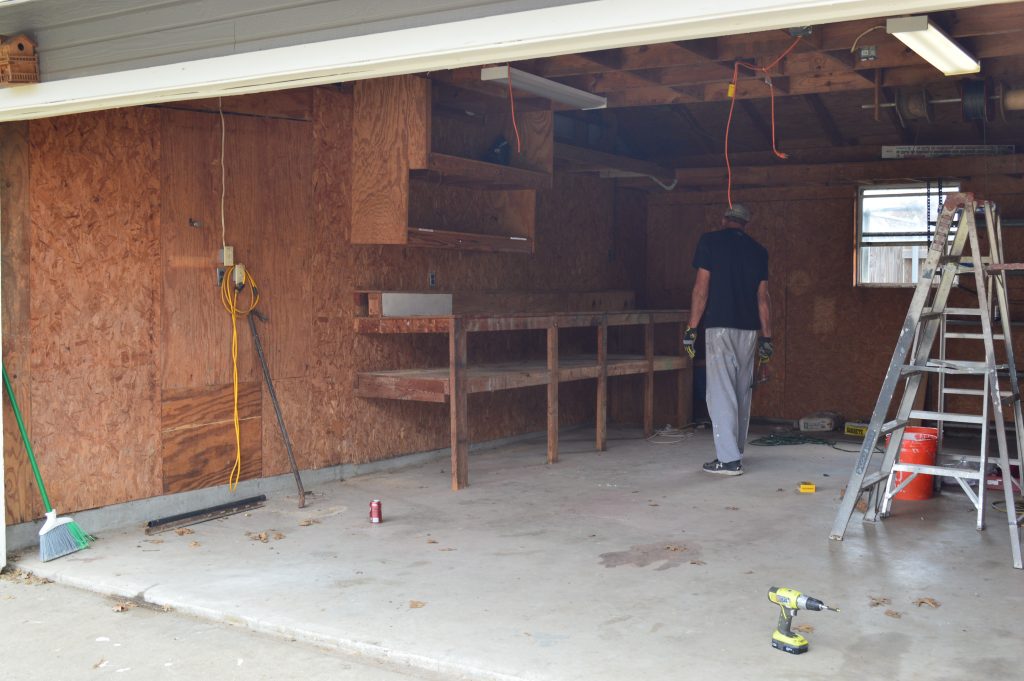 Next, the garage door came out and instead we installed a beautiful French door. Later we got rid of the old OSB walls and installed new OSB ones. We also installed a new ceiling and one more window. 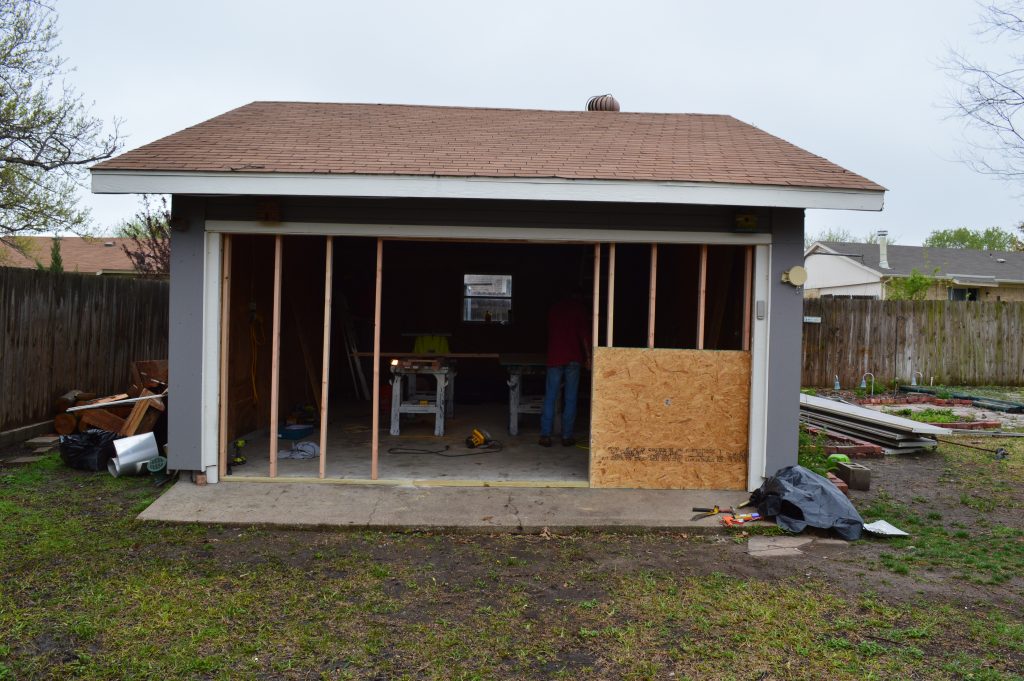 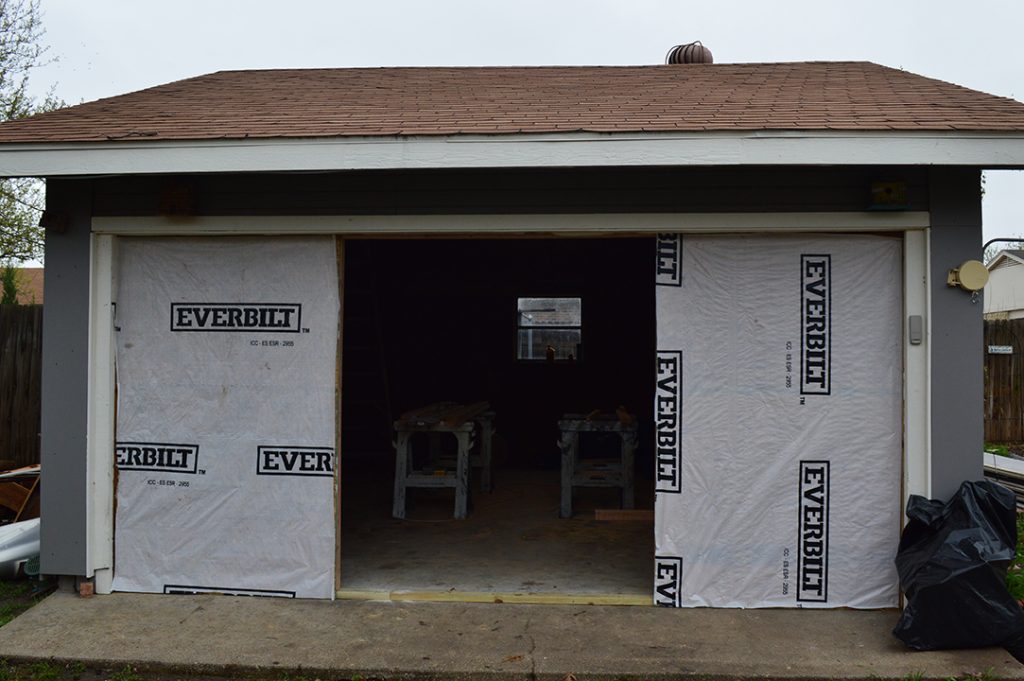 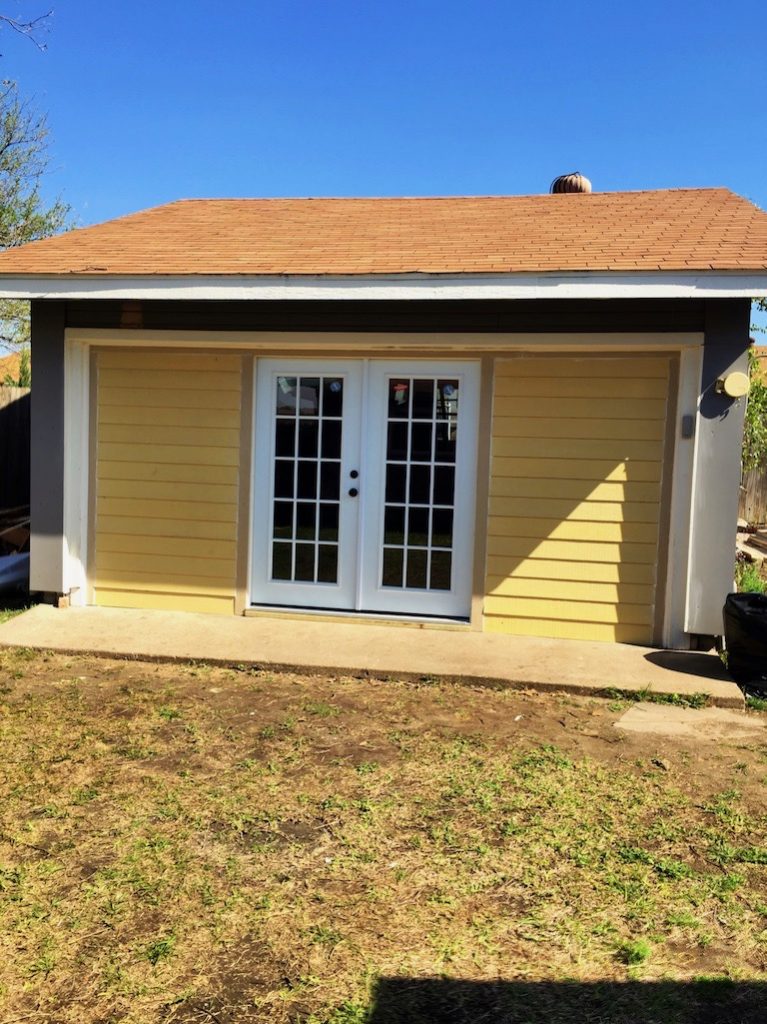 We built a second level to this space. It is a little hide-out with some light.

Should anyone like to climb and see it, or make it into storage, they’d have to use a ladder.

We installed two beautiful skylights that gave the whole space a new rich look and much more … well,  light. 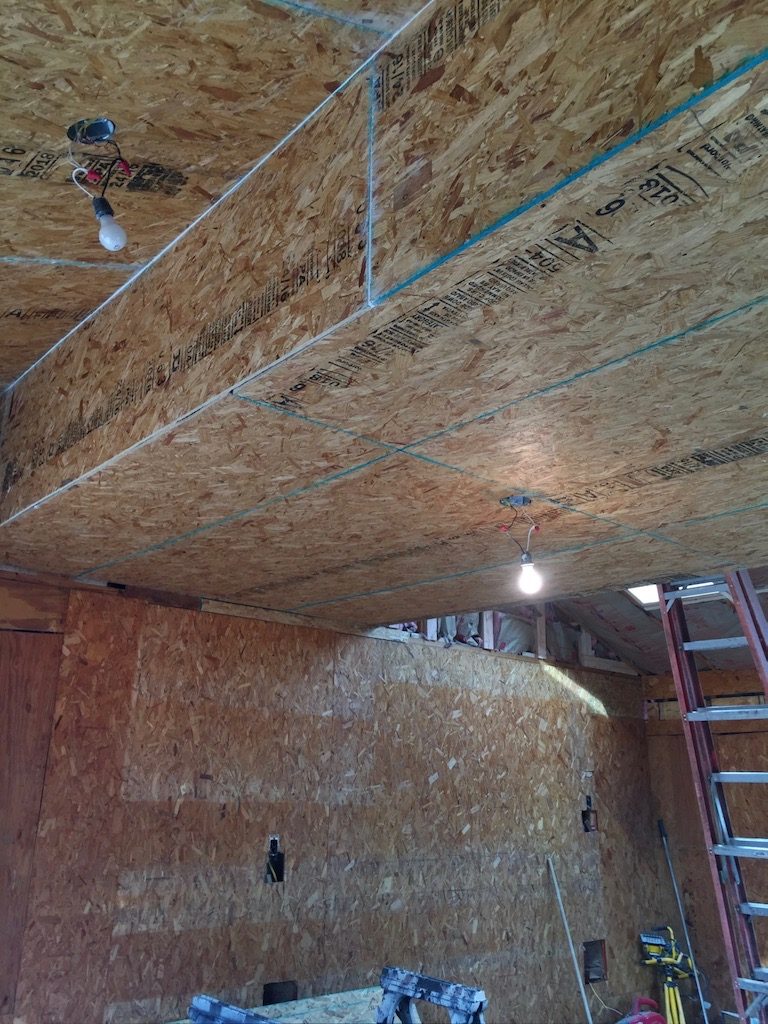 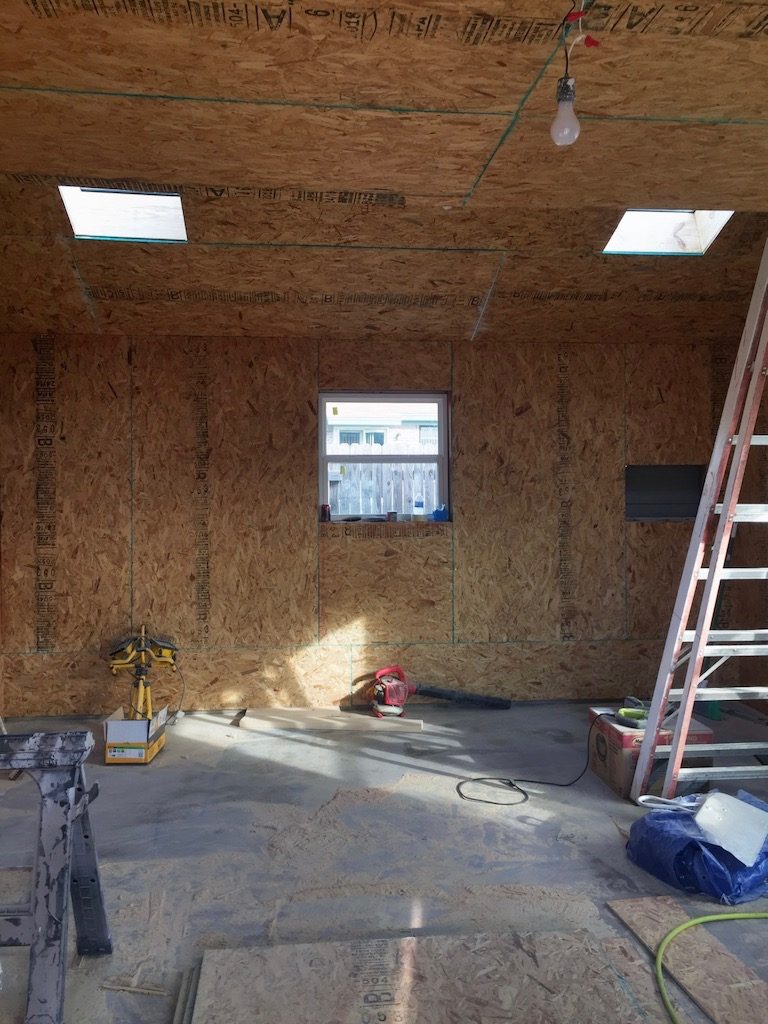 I hired some guys to put the lights, ceiling fan, and A/C.

I also hired someone who painted the walls and ceiling so smoothly, that you really could not believe that all the surfaces were made of rough OSB.

Unscented prime oil paint was used to paint the OSB walls and ceiling. 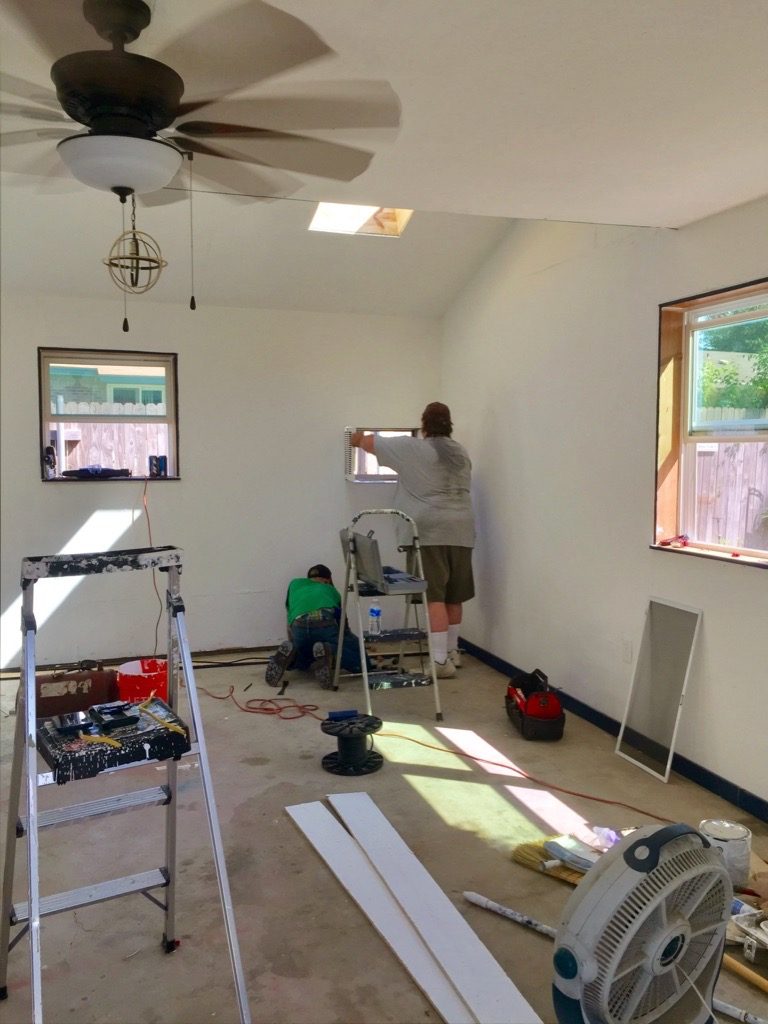 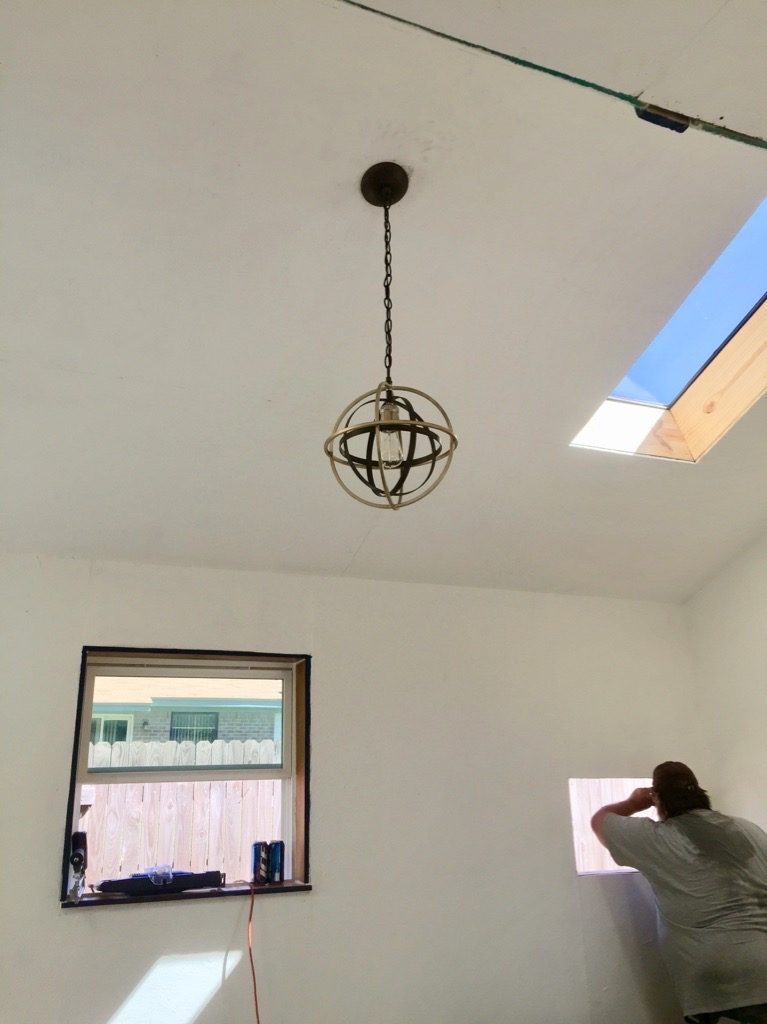 Next, I painted psychedelic shapes on the concrete floor outside, cleaned and painted the interior floor, and added some positive words and blue illustrations.

Two nice guys came and took away all the trash, and I could finally take care of the garden, paint the exterior of the windows blue, and just spread good vibes. 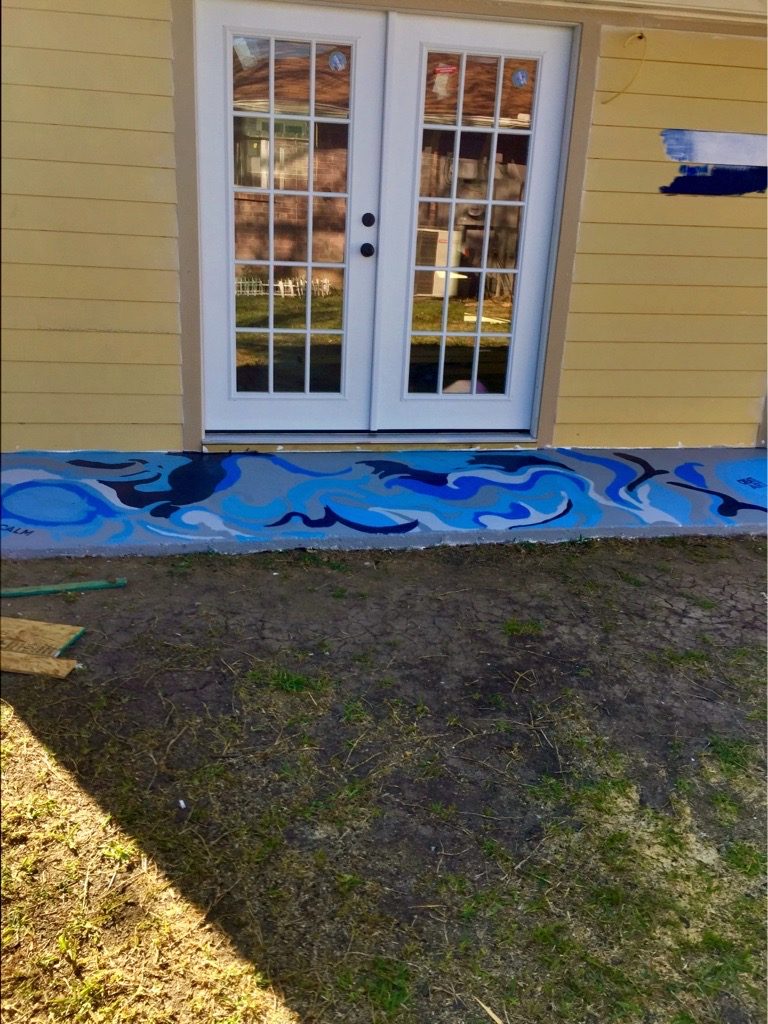 Notice how much trash we took out of the space… 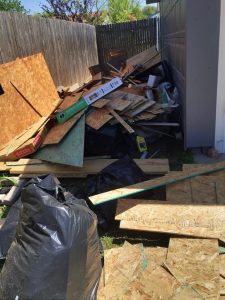 The woman cave was ready to welcome nice people and creative minds.

And here is how this beautiful place looks today. 😎 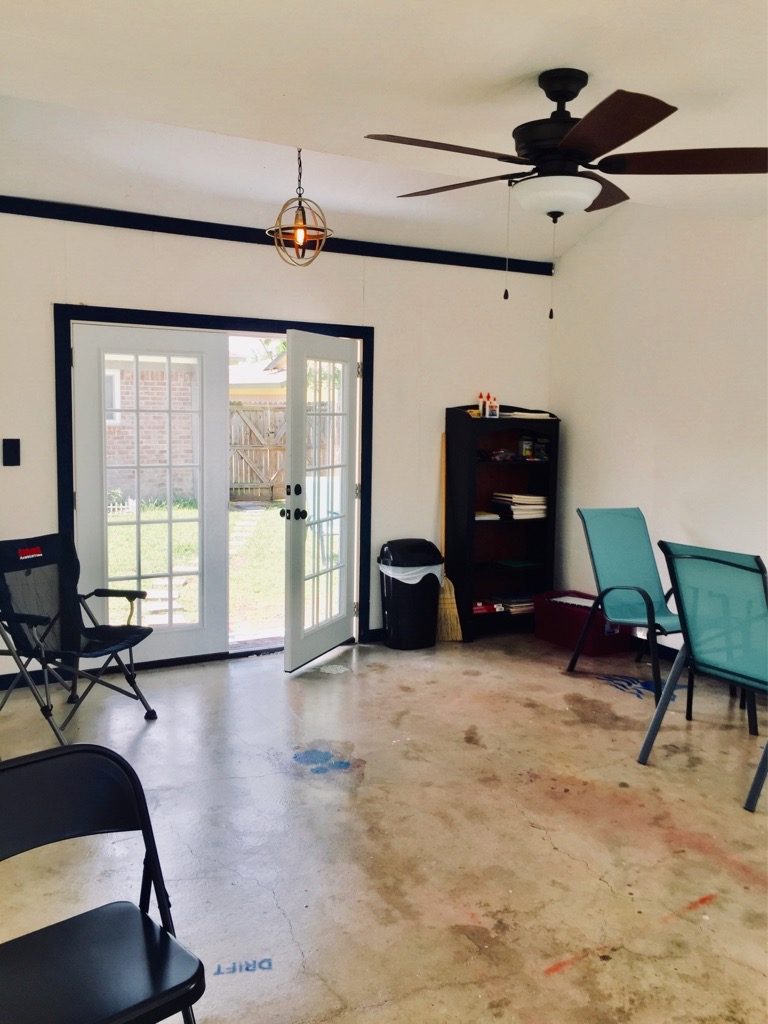 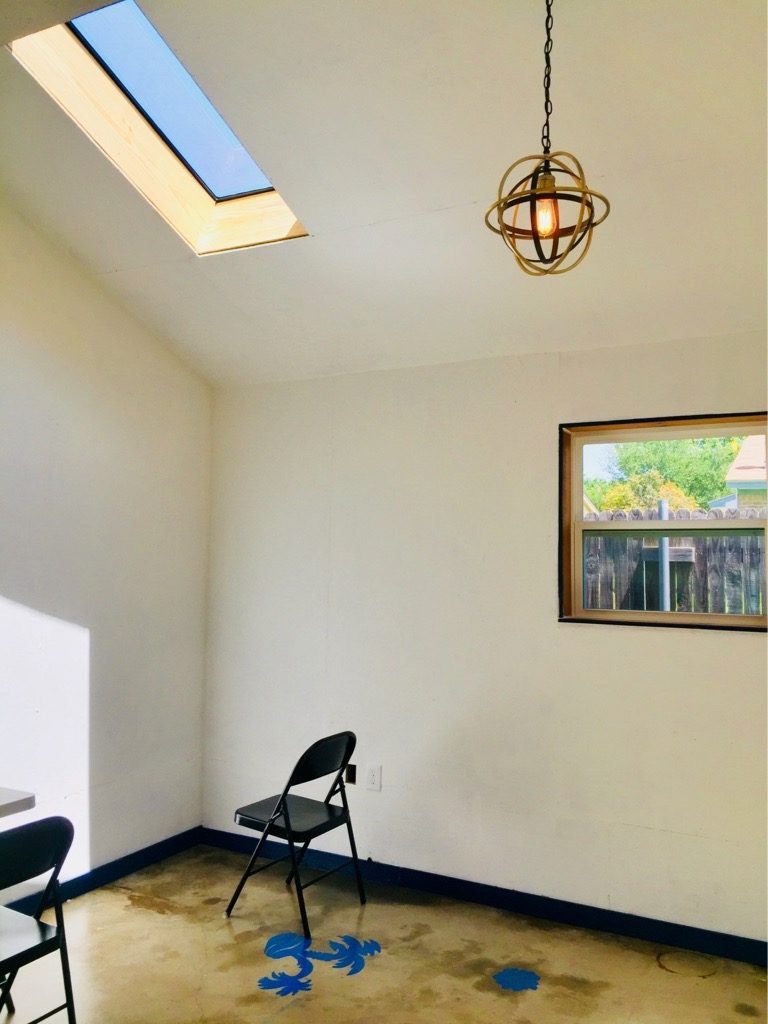 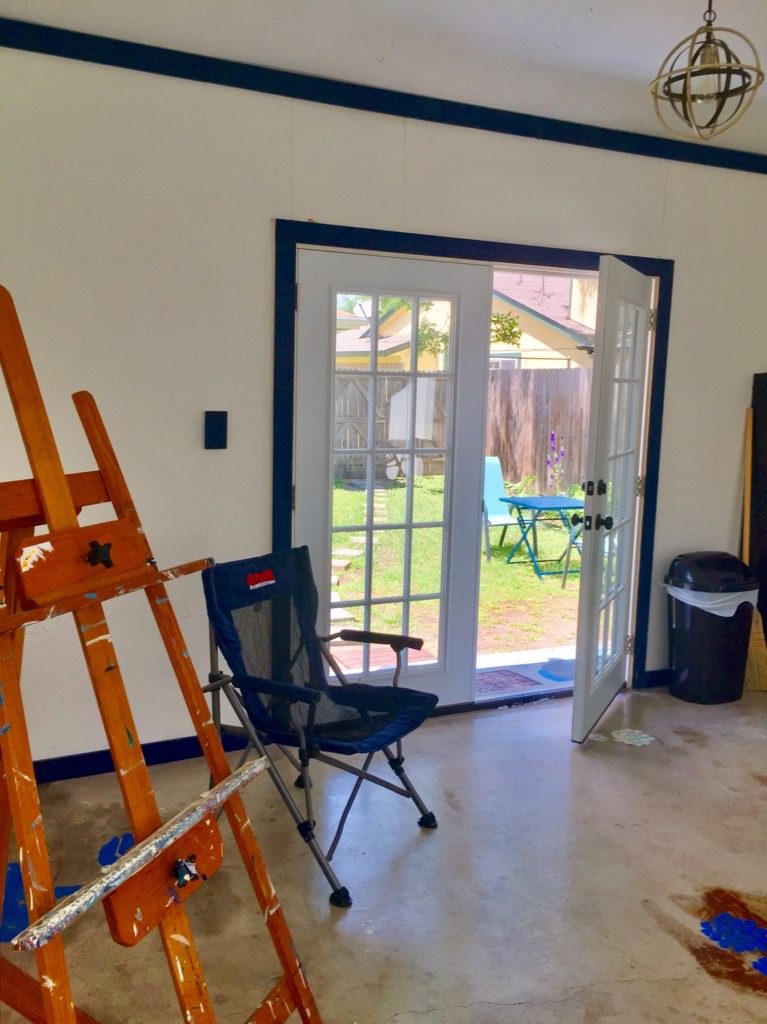 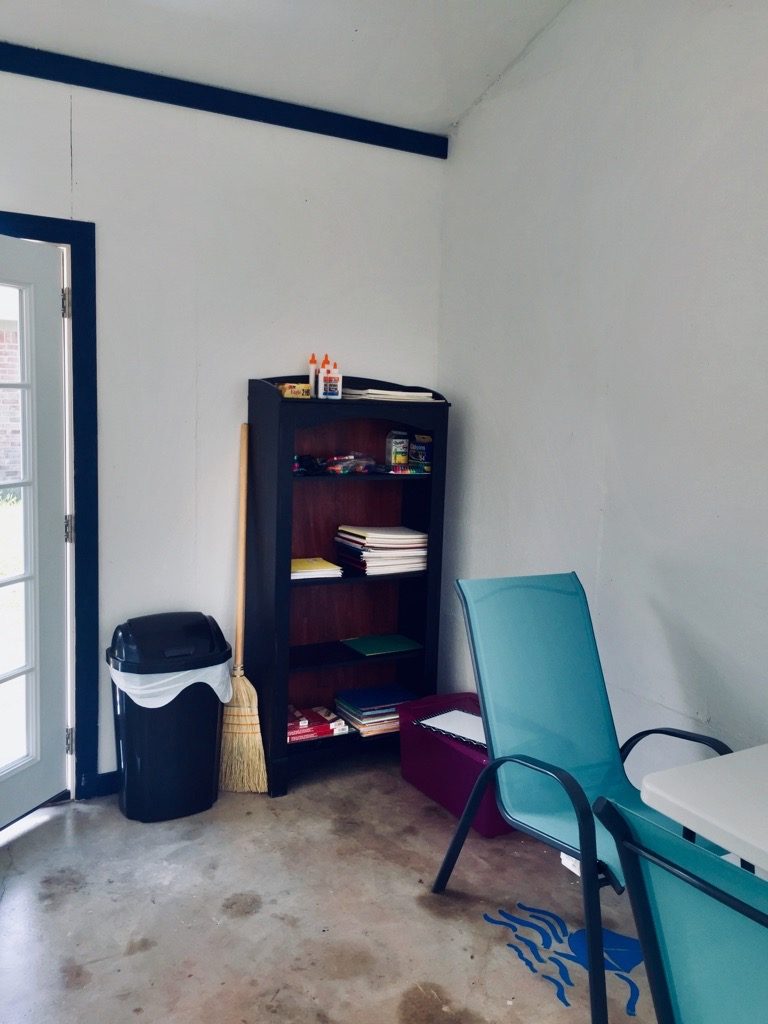 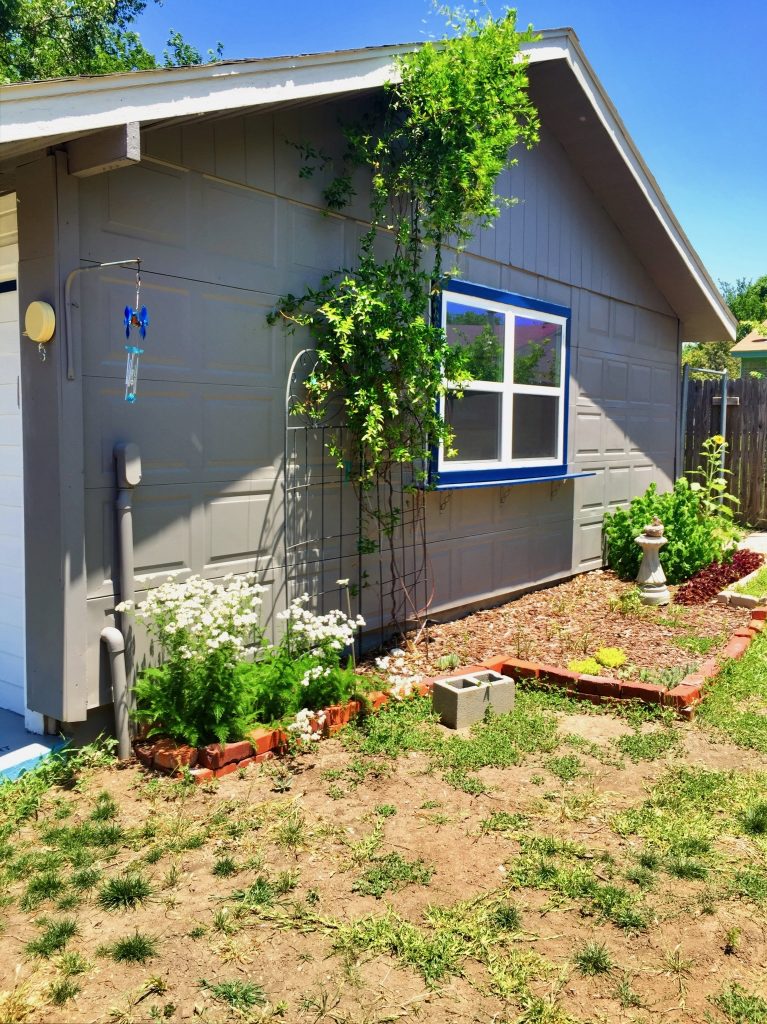 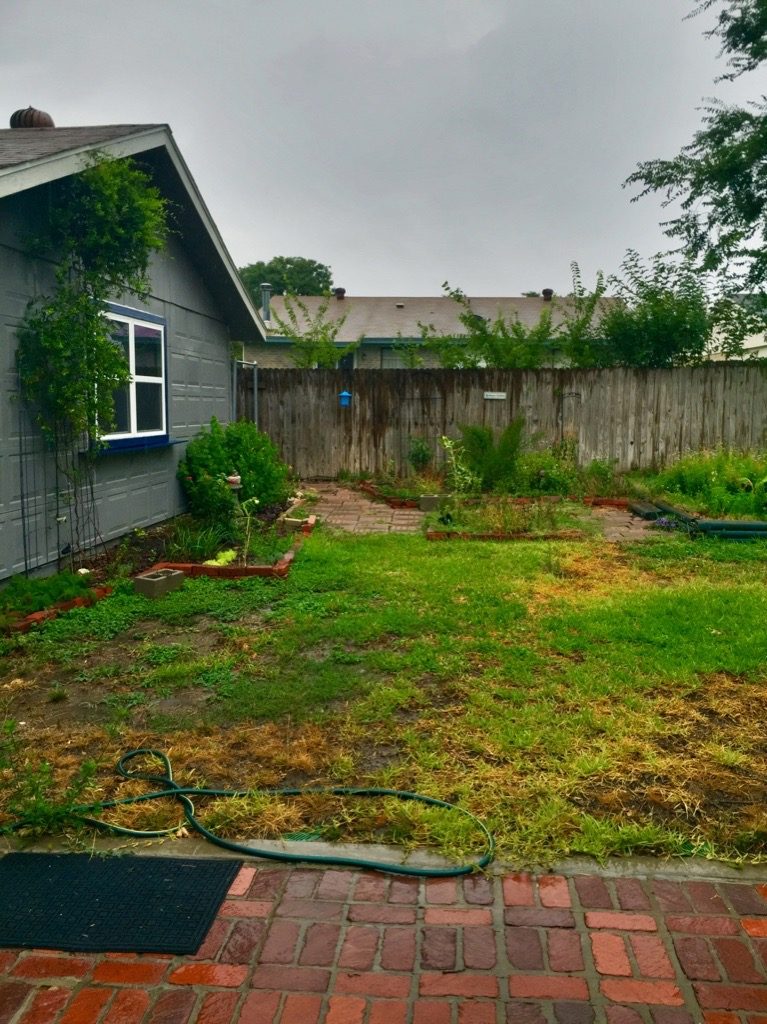 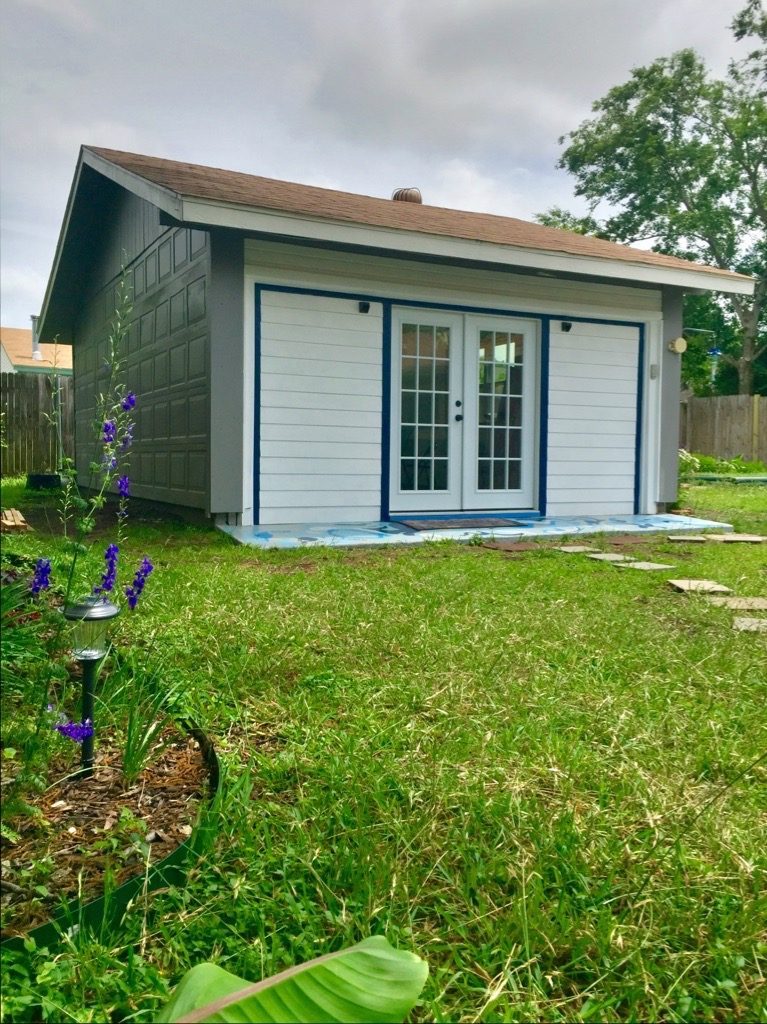